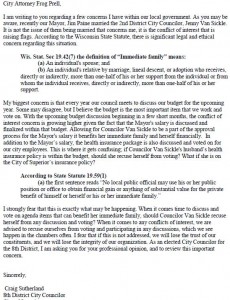 “I strongly believe we need some guidance on what to do moving forward,” Councilor Sutherland said.

“There are conflicts of interest with immediate family members I’m concerned of where one can financially gain not only within their salary but within their health insurance package that the city offers,” said Sutherland. “I feel these lines are very blurred.”

While he wants guidance from Attorney Prell, in this situation Sutherland believes Van Sickle, “she should be recusing herself from discussions and votes moving forward.”

And he said it calls into question Wisconsin State Statute 19.59(1):

a) the first sentence reads “No local public official may use his or her public position or office to obtain financial gain or anything of substantial value for the private benefit of himself or his or her immediate family.”

“The state statute is very clear that there is no conflict of interest here,” said Mayor Jim Paine. “In fact, relationships in Government are very common throughout the state.”

According to Paine, the Mayor’s salary and benefits will never be effected by Van Sickle. “Councilor Sutherland did not tell the truth in his complaint.”

“My salary is not approved through the general fund budget. The council does not have the power to change my salary at all so a conflict can’t exist — that’s state law,” he said. “Furthermore even my benefits are a completely separate process.”

Still, Paine feels Van Sickle can and will recuse herself whenever an issue warrants.

“We are both gonna have conflicts from time to time and she in fact has recused herself from conflicting votes in the past. She’s demonstrated a very high degree of ethics when it comes to making sure she represents her constituents,” said the Mayor.

Constituents, according to Councilor Sutherland, are at the heart of the issue.

He said he has heard questions from some of his own, hence his letter to Prell. “I feel like when we lose the trust in our constituents, we completely degrade the integrity of our organization.”

Paine on the other hand, said he has yet to hear of any. “Many of my friends, family and constituents have reached out to issue congratulations. None have issued concerns about a conflict of interest. Councilor Sutherland said that to me but I don’t believe he’s telling the truth.”

Meanwhile, Councilor Van Sickle released a statement to FOX 21 which reads in part:

My number one focus is now what it always has been: providing the highest level of service and representation to East End, Allouez and Itasca. The results speak for themselves. It is no Councilors job to subjugate, undermine, or regulate any other member of the body. I am a professional and take my job seriously. This baseless complaint lacks a fundamental understanding of municipal operations. More of the same from this guy, he has entirely too much time on his hands.

“It’s pretty low to attack a person’s family and personal life even for Councilor Sutherland but quite frankly we’ve gotten used to this kind of behavior from him,” Paine said.

But Sutherland said it’s not an attack on either of their characters.

“I don’t want this to be personal at all I would like to add that,” he said. “If there is a ruling that says they can do this I’m completely fine with that.”

FOX 21 reached out to all the other Superior City Councilors to get their take on this. Of the ones that responded: