Our Underwater Backyard: ‘Without you, our ocean has no voice’

By admin
Apr 03, 2021 Leave a comment
in Relationship Trends


My Edmonds News is publishing monthly stories and photographs from the Edmonds Underwater Park, with features written by members of the youth Dive Team led by Annie Crawley, Edmonds underwater photographer, filmmaker, writer and ocean advocate.

I grew up exploring beach tide pools and watching ocean movies. These experiences shaped my childhood and my love for the ocean. Before the 2003 film Finding Nemo, my love was only surface-level. This film introduced me, and many others, to the life that exists below the ocean’s surface. In the movie, Nemo’s anemone home shows the strong relationship between clownfish and anemones all over the world. This unlikely relationship between two different animals is what scientists call symbiosis. In Latin, symbiosis literally means living together. 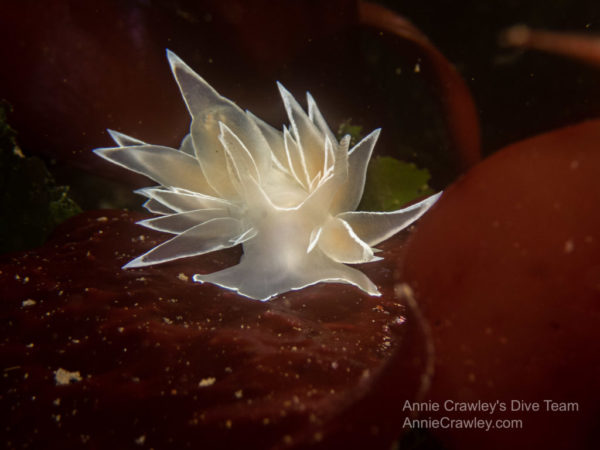 I have always been amazed by “friendships” between different species because despite how different they are or what type of organism they are, they managed to have a relationship. Through learning to scuba dive at age 12, with Annie Crawley and joining her Dive Team, now as a 15-year-old junior scientific diver and underwater photographer, I have become more aware of the intricate relationships that exist around me. Many examples of symbiosis exist right here in our own backyard of Edmonds Underwater Park, located on Puget Sound in the Pacific Northwest.

I’ve learned that symbiosis is a close relationship between two species in which at least one species benefits. There are three main types of symbiosis that describe inter-species relationships on land or underwater: mutualism, commensalism, and parasitism. 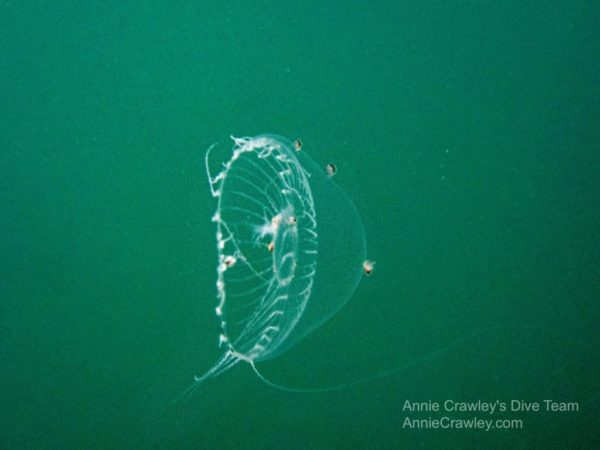 Mutualism is when both species benefit from the relationship. One example of a mutualistic relationship in Edmonds Underwater Park is between lingcod and cleaner animals. Shrimp or sculpins eat the parasites off lingcod and lingcod get cleaned by these animals. Both species benefit from each other in this relationship, because the shrimp and sculpin receive a free meal while the lingcod receives clean gills. Another example of an animal that participates in a mutualistic relationship is the anemone. Here in Puget Sound, there are many types of anemones: the painted anemone, giant plumose anemone, and buried green anemone are just a few. Anemones have symbiotic relationships with several other species besides Nemo. For instance, anemones have a mutualistic relationship with zooxanthellae, tiny plant cells that live in/on the anemones’ tentacles which produce food for anemones through photosynthesis. The zooxanthellae benefit by receiving carbon dioxide from the anemone’s respiration, nutrients like nitrogen and phosphorus which they need to grow, and a shelter to live in. The anemones benefit from receiving oxygen and food in the form of glycerol, glucose and alanine from photosynthesis by the zooxanthellae. Mutualism is so amazing because these species just figured out that they can help each other in different ways so they kept the relationship going. 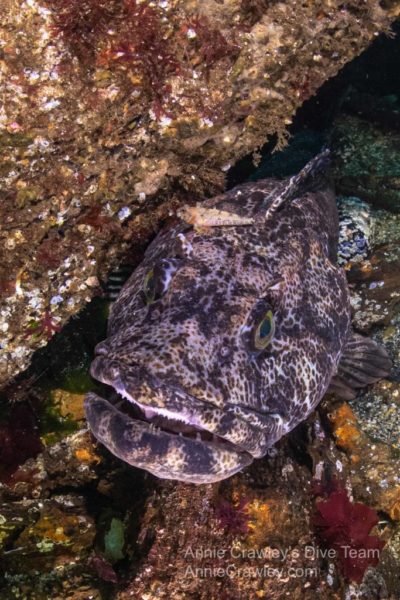 Commensalism is a second type of symbiosis, in which one species benefits while the other is unaffected. An example of a commensal symbiosis occurs between crustaceans and jellyfish. Juvenile crabs can live in or on jellyfish. The crabs benefit from being protected from predators, getting food that is caught in the tentacles of the jellyfish, and being transported to other sources of food and places to live. The crab benefits but there is neither a positive nor negative effect on the jellyfish, so this is commensalism. I was amazed when I saw the tiny little crabs on the jellyfish for the first time! I would have never thought that jellyfish would host juvenile crabs. Another example of commensalism includes anemones and shrimp. The anemones protect the shrimp from predators and sometimes the shrimp will eat excess food from the anemone. 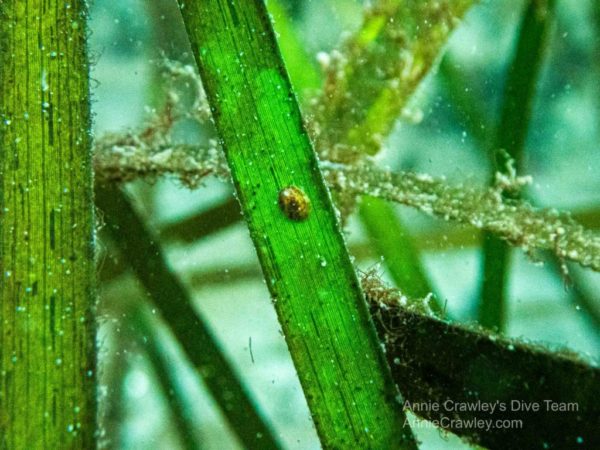 The third type of symbiosis is parasitism, which is when one species benefits but the other is harmed. It doesn’t always seem like parasitism is a symbiotic relationship because the word parasite generally has a negative connotation and symbiosis is usually positive. There are many different types of parasites that will live in or on fish. The parasite benefits from the relationship but the fish is affected negatively by when the parasite sucks the host’s blood, lays eggs in the host’s body, or when the parasite grows and block’s the host’s gills. Some parasites are microscopic, but there are some we can see just with our eyes. Microcotyle sebastis live in the gills of rockfish, including here in Puget Sound. The effects are infection in the fish’s skin and gills, irritation, swollen gills, and sometimes erratic swimming behavior due to severe infections. 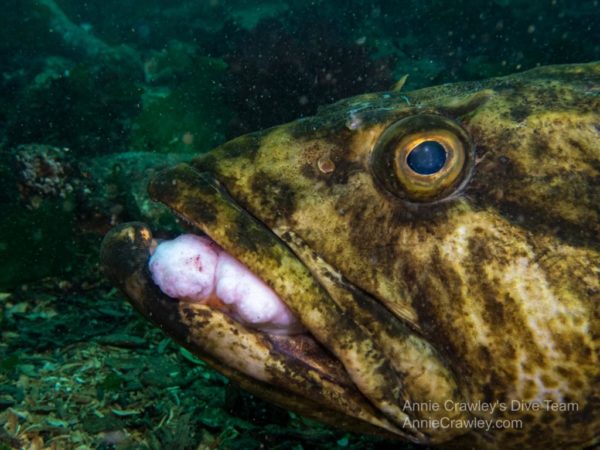 Fish lice are another type of parasite that can be found on the skin, fins, and gills of fish. These parasites have been found on fish that spend part of their lifetime in freshwater and part of their life in saltwater, like salmon. Larval roundworms or nematodes can be found in the body cavity of the fish, on the intestines, on the liver, or embedded in the skin of the fish. The parasites can cause lesions or growths in the stomach walls of the host.  All of these parasites will cause harm to or kill their hosts over time. While diving in the Edmonds Underwater Park, I have seen lingcod that are infected with tumors in their mouths. These tumors can be caused by parasites, but also may be injuries from fishing, pollution, or viruses. 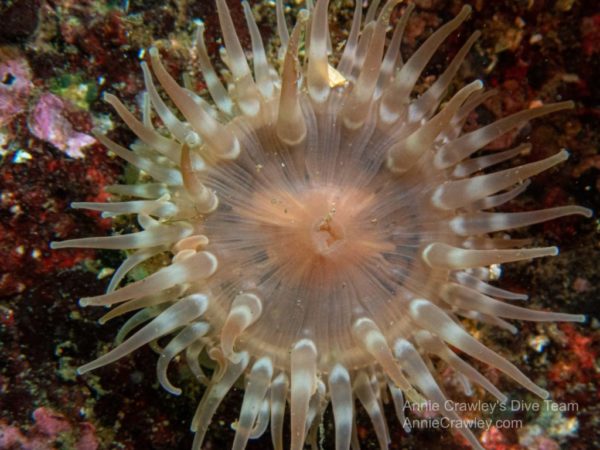 Each organism has a relationship with other organisms and their physical environment. This is what we call an ecosystem, and these relationships are important to the health and balance of the ecosystems. As a diver and photographer, I have begun to look closely at how organisms in Puget Sound interact with each other. I love to see mutualistic relationships, when animals help each other. I interact with ocean organisms too– not only in the ocean but with the actions I take in my day-to-day life. What I choose to eat, which products I buy, where I put my trash, and how I use fresh water affect the ocean and its inhabitants. Whether or not we realize it, we each interact with the ocean in some sort of way. As humans, we need the ocean, but the ocean does not need us. Most of us have a parasitic type of symbiotic relationship with the ocean, as seen in collapsing fisheries and pollution in the Puget Sound, Salish Sea, and around the world. We need to change our relationship with the ocean to make it commensal. Some things we can each do to take care of our underwater backyard are to stop using single-use plastic products that can end up in the ocean, make sure the seafood we buy is from sustainable sources to protect the animals’ populations, and use our voices to tell friends and family how all of our lives are connected to the ocean. We all need to speak up for our ocean to care and protect it. As my dive instructor and mentor Annie Crawley always says, “Without you, our ocean has no voice. Speak up for our ocean, she needs us now more than ever before!” 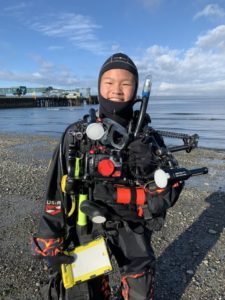 At age 12, Elise learned to dive at Edmonds Underwater Park. Since then, she has been studying the ocean with the eyes of a scientist and photographer. Now a 15-year-old student at Mountlake Terrace High School, Elise loves exploring and learning about Edmonds Underwater Park. She is always excited to help new ocean explorers learn how to set up their gear and identify creatures. She hopes that by sharing her ocean experience, it will inspire others. Aside from diving, Elise plays lacrosse, runs cross country, skis, paints, and bakes awesome cookies for the Dive Team. She hopes to become a shark researcher.

You and your kids do not need to be a scuba diver to join Annie Crawley’s Dive Team, you just need to commit to becoming a voice for our ocean. Our mission and vision is for everyone in the community to share stories about our ocean because without us, the ocean has no voice. Join the dive team today and lend your voice to ocean conservation: www.ouroceanandyou.com/join-now